Un-Occupied/Un-Real Estate/Promise Land… a variety of title names popped to mind when I first began this series in 2012. This body of work depicts the demise and destruction of American homes and a way of life on the eastern end of Long Island.  Photographed in a documentary style, my vision addresses a local view of the effect of the current economic crisis on real estate, the landscape, and the perception of home. While a few structures in this series have been re-occupied, many others are no longer standing.

The images that comprise the body of work Promise Land are of structures that peak out from behind branches, creepers, trees and water. Embedded in the natural world that threatens to overtake them, these abandoned homes are as vessels devoid of functionality, yet continuing to exude the personalities of their former inhabitants, standing as sentries that guard their memories and whisper their aspirations. Sternbach’s formal approach rewards the viewer with portraits not only of decaying houses, but also of encroaching landscapes; poetically entwined and indistinguishable from each other. Sumptuously photographed in the rural east end of Long Island, (long a retreat for the wealthy of New York, but also belonging to the local community known as Bonackers), the pictures reflect on states of transition: the changing economic times, the forward march of unbridled nature that endures beyond man and the man-made, and the inevitable transience to which we are all subject. The power of the work lies not only in the documentation of its subject matter, but in its ability to convey so succinctly, and without sentimentality, the cultural significance of Home–as refuge, as status symbol, as identity. The promise and subsequent ‘failure’ embodied in these homes reveal a poignant irony that is further accentuated by the exteriors of these homes that reveal the interior lives of their owners. Though a ‘Promised Land’ actually exists in Napeague, Long Island, Promise Land becomes a larger, more reflective sociological study of a society in transition, distinguishing itself through the acute recognition of each of its unique, gloriously idiosyncratic and constituent parts.* 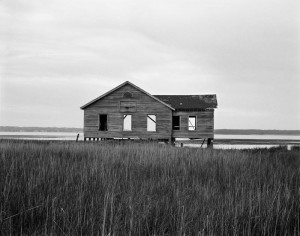